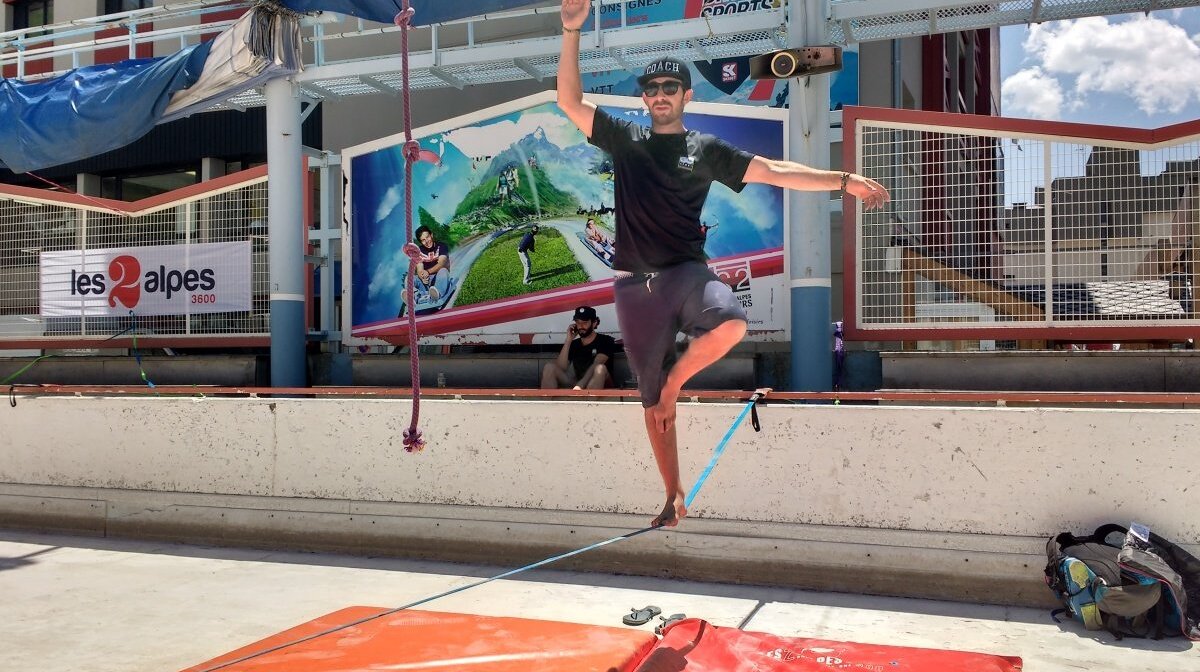 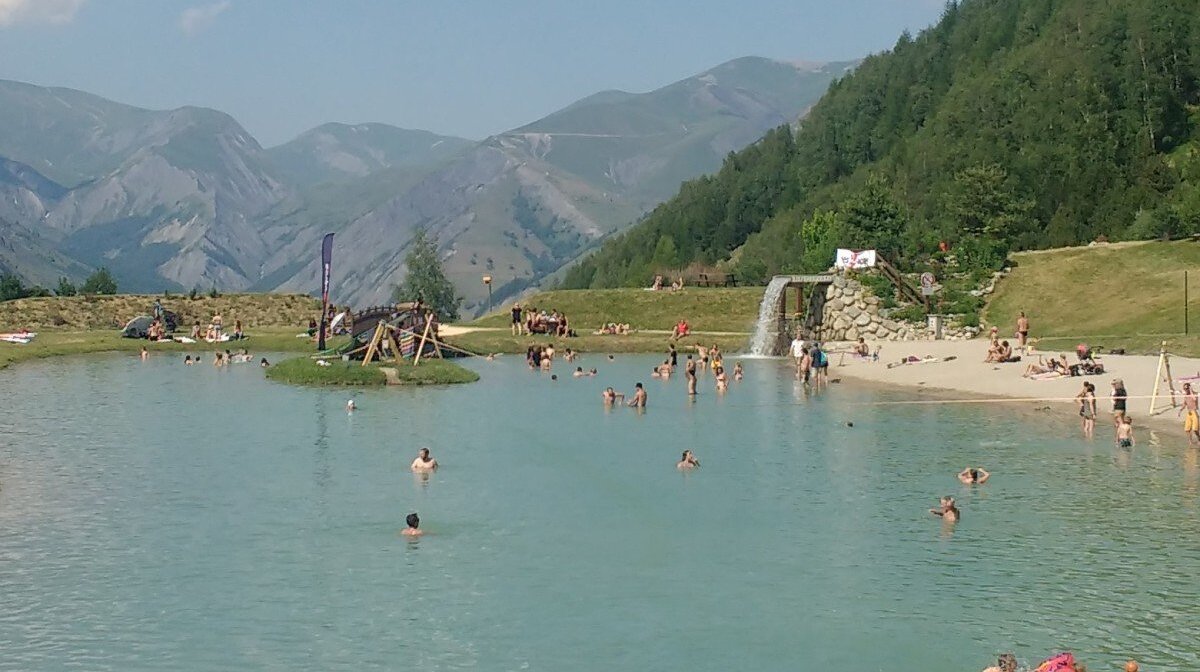 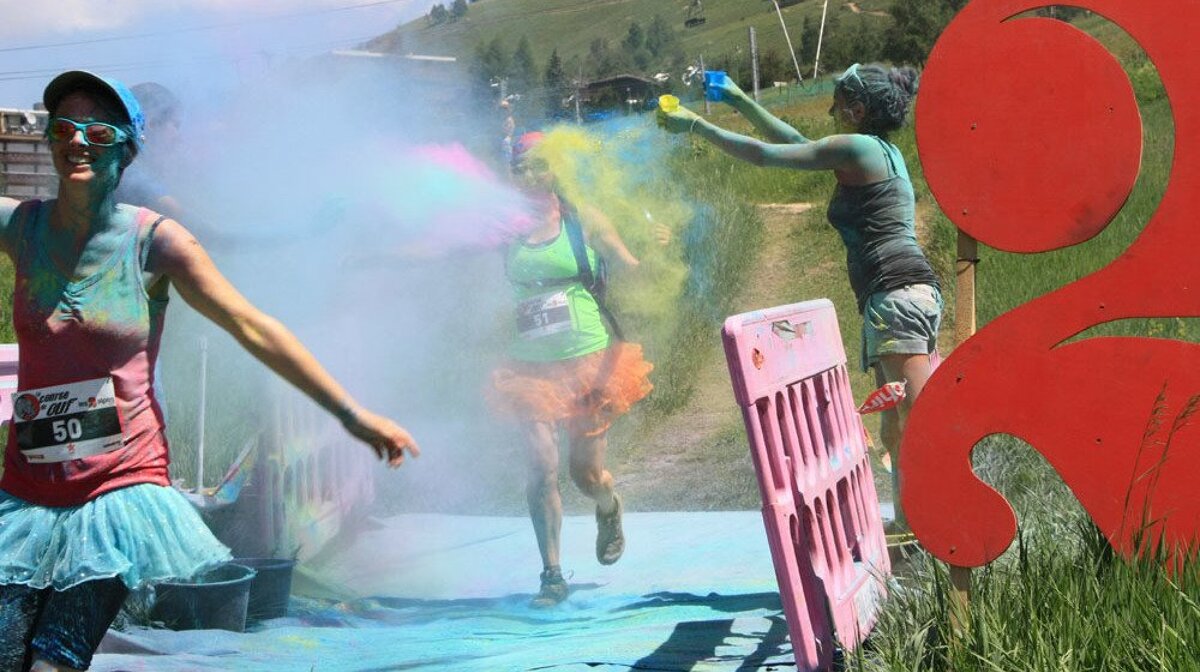 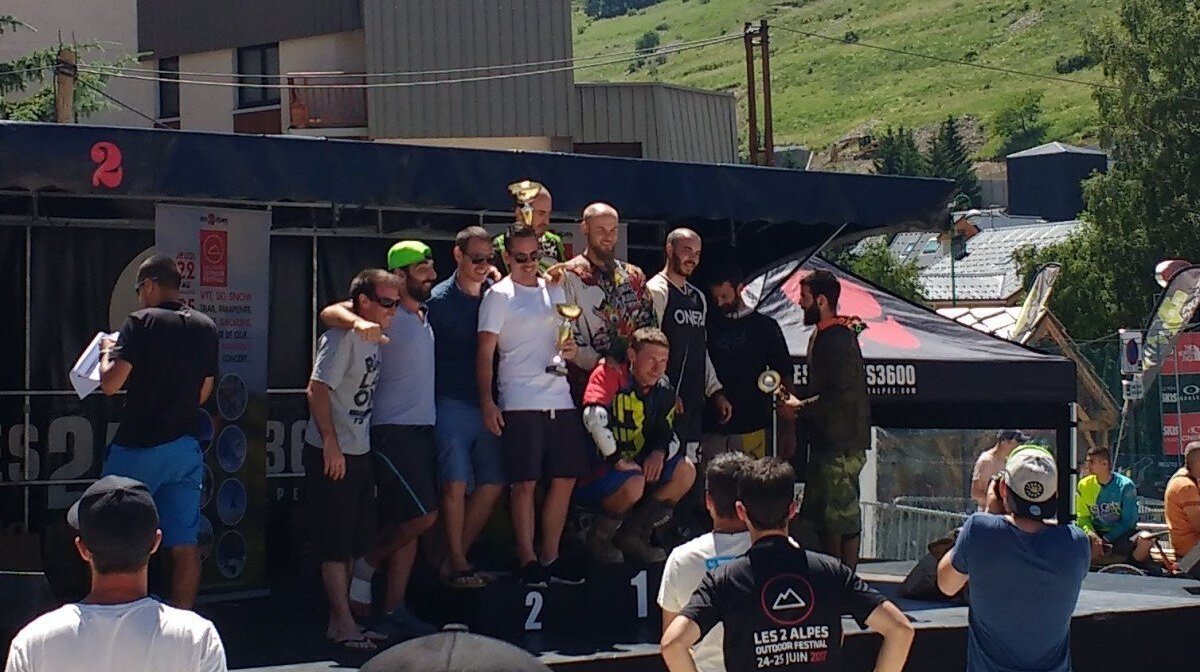 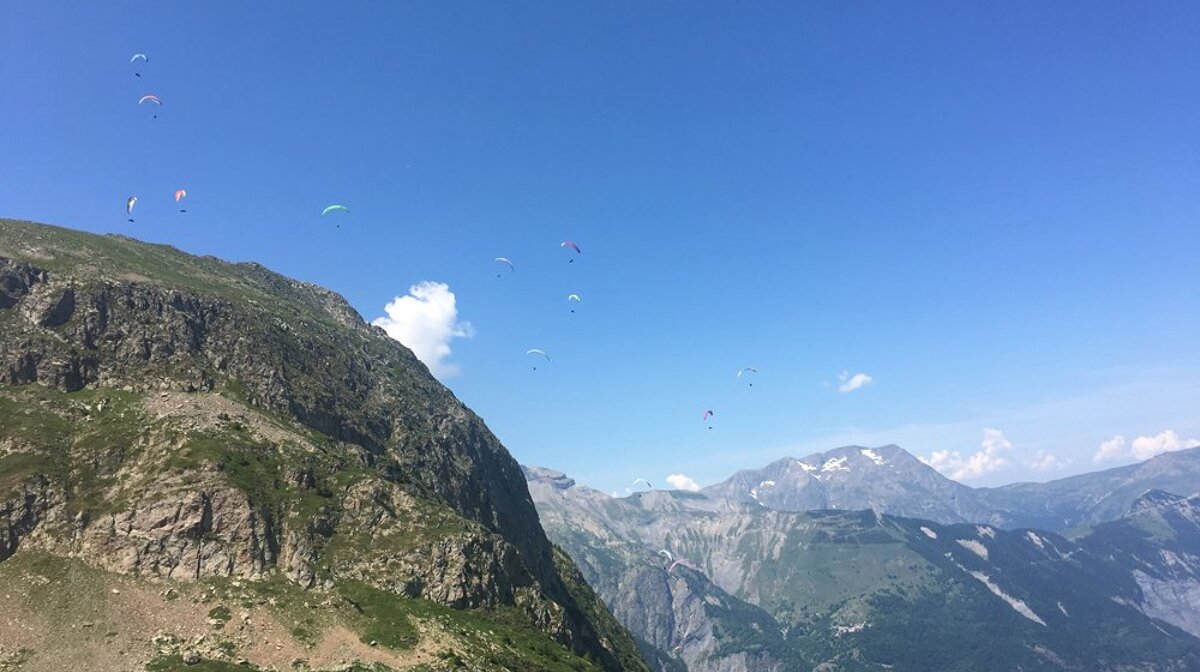 a swimming lake in les 2 alpes

runners with coloured paints thrown at them

a podium of mountain bike winners

lots of paragliders in the sky

signs for the outdoor festival

The Deux Alpes Outdoor Festival last weekend was a chance to watch and try out a wide selection of the summer sports available in the resort.

The festival took place over four days, although most of the action was at the weekend and the resort opened officially on the Saturday. Thursday saw the start of the Paragliding pre-World Cup, while Friday added the MTB opening party with exclusive access to the mountain bike trails for participants. The MTB Moon Party completed the day with a barbecue and a guided descent from the Diable as night fell.

Saturday and Sunday offered introductory and improver sessions in multiple activities including yoga, Zumba, slackline, rock climbing, and golf. These could be taken individually or as part of the festival pass package which also included a picnic.

The lake by the foot of the slopes, Lac de la Buissonnière, was as busy as I have ever seen it. With swimmers, sunbathers, and slacklines over the water, it felt like a beach resort in the sunshine. The ice rink, ice-free in summer, had been transformed into a slackline stadium, with different types of slackline, coaching, overhead ropes for assistance, and demonstrations. I thought I was reasonable on a slackine, but a few minutes with coach Romain Billard showed that I had a lot to learn. I could feel myself improving straight away under his patient tuition. Saturday evening’s entertainment was courtesy of French rock band Miss America, whose unashamedly eighties-styled riffs went down well with the crowd in the square. 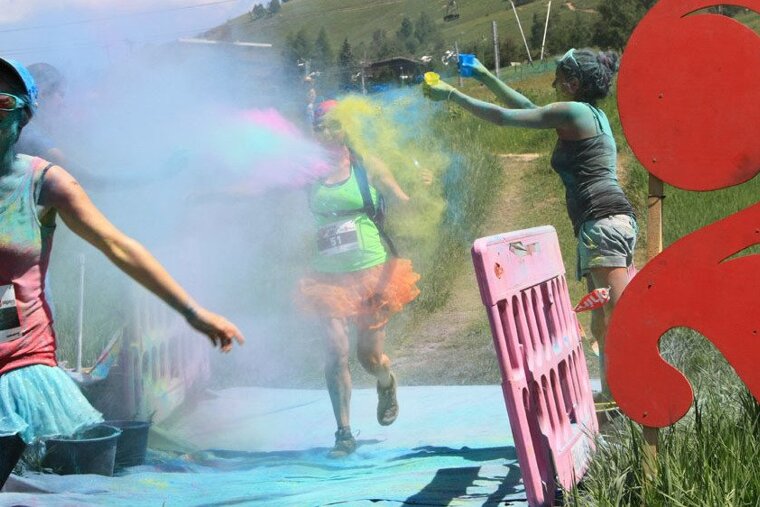 The biggest event of Saturday was the Course de Ouf, or obstacle race, with over a hundred and fifty participants. This 10-kilometre course took in twenty-seven obstacles on a tour of the resort, with shorter courses for juniors.

The event was as popular with locals as it was with visitors, and as entertaining for spectators as it was for the participants. The colour-zone obstacle ensured that runners arrived at the finish colourfully covered in paint. Most competitors entered in pairs, but there was an individual event as well. The winning pair were Mickaël Colobam and Damien Garnier from the Serre Chevalier Hockey Club team.

Sunday saw the running action turn to the mountains for two trail runs. Sixty-five people assembled in the square for the Trail de la Fee (15km, 1000m ascent) and the Summit Trail (35km, 2750m ascent). I took part in the former, not feeling quite ready for a big run this early in the summer. It turned out to be one of the best trail courses I have run, and one I would recommend to any trail runner at this distance.

Early morning cloud gave cool running conditions, but the sunshine returned later on in the day. The race began with an easy kilometre or so on green ski pistes before a twisting technical descent into Cuculet village. From here a long steep ascent followed the ridgeline to La Fée, where I gratefully turned right for the Fée Trail and the Summit Trail runners kept climbing.

My route gave a few minutes respite with a gentle track to the Thuit bowl. The final climb to Les Crêtes was followed by a direct finish down the front face to the centre of town. The Summit Trail took the runners up onto the glacier for a tour of the summer skiing pistes, before a challenging descent to St. Christoph and return to Deux Alpes via the Balcons de Veneon. 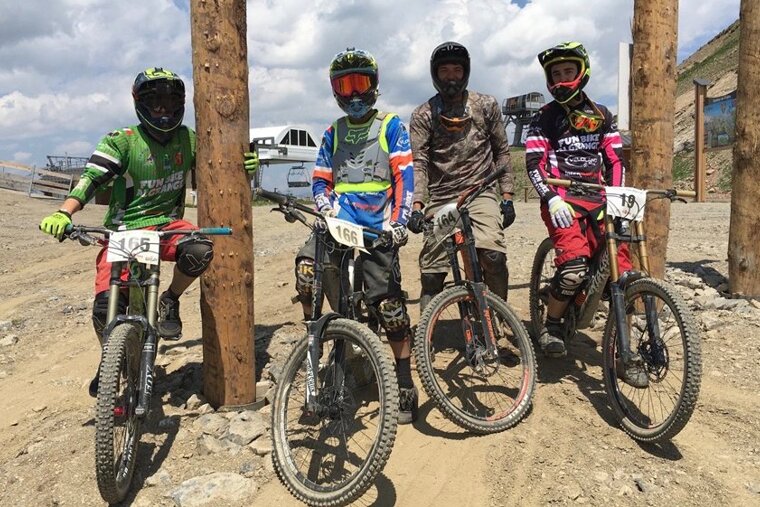 Following on from the MTB opening party and Moon party on Friday, the mountain bike competition started on Saturday with the Enduro Team Up race.

Around forty participants took part in two runs of six and eight kilometres. On Sunday, the event switched into Downhill mode, with a two-run DH Team Up competition on the Sapins Trail – probably the most challenging of the red downhill trails in the resort. Both competitions had prizes for individuals, pairs and teams. 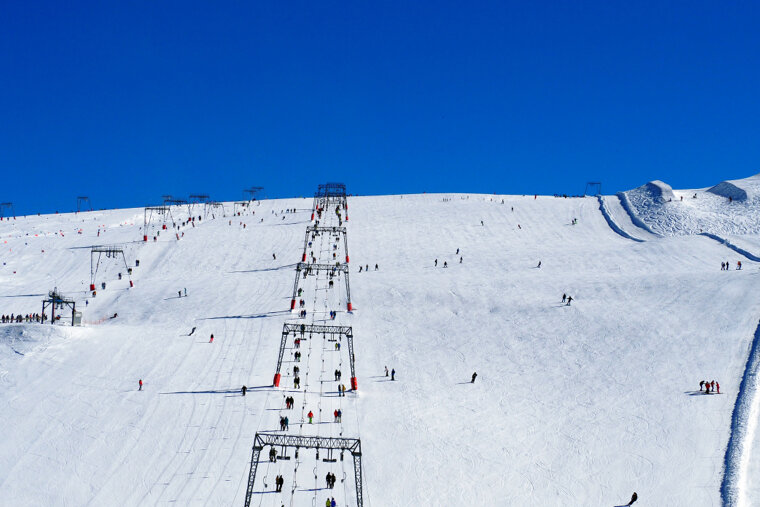 Ski racing and freestyle were both represented at the weekend, beginning with a ski slalom on the Saturday. The racing had an interesting twist whereby races on snow on the glacier were used as qualification for a roller ski slalom down the Rue des Vikings later in the day. The top 32 racers on snow got to enter the final on roller skis. Men’s and women’s winners were Matthieu Neumuller and Claire Chalvin respectively.

Freestyle took centre stage on the Sunday with the punningly named 'Forest Jump' competition. This featured a ‘banked slalom’ utilising different snowpark modules. Snowboard winners were Eliot Pentecôte and Lisa Michel, while Hugo Laugier and Emilie (no surname given) took the skiing honours. Dylan Tissot won the under-16 skiing prize.

More information and results for all the events can be viewed (in French only).

If you missed it this time, next year’s edition of Les Deux Alpes Outdoor Festival is planned for the 22nd – 24th June 2018.